I think I have a bug that hasn't been reported. stage 6 SOR2. CPU friend, Jungle road. walking down the diagonal road right after the turkeys fighting the Signal's. The camera did not pan down far enough for us to continue the level.

I'm not sure if CPU friend needed to move a few steps closer to the right side of the screen to move the camera further down or if it is more of a system bug. Again I didnt see this specific issue reported, so if it has already sorry!

*This happened before downloading the bug updated link to 5.2 so it may already have been fixed*

If your CPU friend gets stuck, you can press the Special Combo button quickly twice to yell HEY!, causing the CPU partner to jump to your position. This button is mislabeled "Series" in 5.2 and is the button that lets you do the special inputs for Blitzes (such as X, Forward, Forward for 1 Star Blitz).
_________________
Youtube: BareKnuckleRoo   /   Twitch: BKRoo

Imapus Sylicker wrote:Hey guys, where can I get the updated link you guys mentioned? 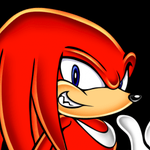 Small glitch discovered (more of a cosmetic one in fact):

On some running animations of characters holding a weapon, the said weapon gets kind of invisible -- I say kind of because, for example, when it happens to Shiva running with a machine gun in the explosion-countdown building scene in stage 8, part of Shiva's hand which is clinged onto the weapon disappears, as if it were behind the weapon being holded, but, as mentioned, the weapon is invisible although still there obviously.

For the sake of info, I must say that I don't remember noticing this glitch in the v5.1.

The pause-delay set to remake it is suppose to be something in bewteen sor2 and sor3 combo hit speed, is that right?
Or there is certain advantages using "remake" over "SOR3" pause delay?

Just mention as I saw Rudra having a bigger penalty damage on remake than on sor3.

I think this was done on purpose because, in the Japanese version of SoR3 (better say BKIII, hehe!), Axel's blitz with a pipe or club, in fact, doesn't drain any health.

You're right. Hm, I guess I only fired up SoR3 to test yesterday, I didn't realize BKIII has that same bug. I assume they must have fixed it in SoR3 to be more consistent with how the rest of the weapons behave. It seems odd to give one specific attack no health cost to the weapon... but it's also slow with a long startup so it's not exactly a great move either!

SoR2 weapon type lets you use weapons more anyway if you want.

I do wish SoR2 type ditched the thing where if you press attack while holding a weapon and standing over a weapon you'll pick it up. It was bad design and means that if there's a bunch of weapons laying around they actively get in the way of fighting, and you can just pick up and throw weapons to get rid of them. SoR3's change so that you won't weapon switch if you attack while carrying a weapon was way better.
_________________
Youtube: BareKnuckleRoo   /   Twitch: BKRoo

Another issue that I think's been around since 5.0:

• When playing with a time limit enabled (Meter Type: Gauge + Timer or Timer Only), Stage 7 of SoR2 route is missing a time refill once you reach the 4 robot bosses at the end that existed in BKII/SoR2. This is by far the most likely spot you'll run out of time in a run because you have to go through a wave of kickboxers + bikers + grenade throwers, then a wave of big bens + knife boss, and then deal with the 4 robots, who jump around wildly and are highly evasive, all on a single 99 second timer. It's very silly, and this section's lack of time refills in SoRR is one major reason I stick to Gauge Only (SoR3's Gauge System is extremely fun, encouraging strategic special use without always costing health).

Note that BKII/SoR2 would actually give you a 99 time refill after pretty much every single wave (with only a few exceptions like Shiva -> Mr. X) whenever you see the Go-> symbol; the only way to run out of time would be to dawdle on a specific wave. You originally got a time refill after every single wave on the Stage 7 elevator, same with SoR1's elevator stage. SoRR is still wildly inconsistent on when you get time refills in all stages. Some waves refill it only to 75, and some don't refill it at all when they originally did. The SoR2 route elevator fight is where the problem is most apparent, but the timer should really refill to 99 after every enemy wave as per the original games. Not only does the timer not really add anything to the game but SoRR's current implementation of time refills is outright worse than SoR1/SoR2 was.

A good example of this issue would be this video: https://www.youtube.com/watch?v=-8dPaog5r9U

The forum's own E. Signal is a great player, but even with SoR2 Axel, a character considered to generally be very powerful, they struggle to get through this section and then deal with the robots on a strict time. Look at how much health the robots have left; Axel woulda died to a Time Over had he not been killed at the 7 second mark, which probably could have been avoided with careful defensive play on the Gauge setting, and is mostly due to the player feeling unduly pressured by the unreasonable task to try speedkill 4 massively evasive bosses with huge bosses with about a minute and a half left on the timer.
_________________
Youtube: BareKnuckleRoo   /   Twitch: BKRoo

Lo and behold: THE FLAMING KNIFE!

There is a palette related bug with the robo x fake intro.

it is a mod, but one of my early crappy ones that didn't ever use custom palettes.
5.1 to the left, 5.2to the right.

It is only on the fake intro, but also happens on several other palettes.

Even on sorkmaker itself already can been seen.

Other palettes are affected, although only for the fake intro. 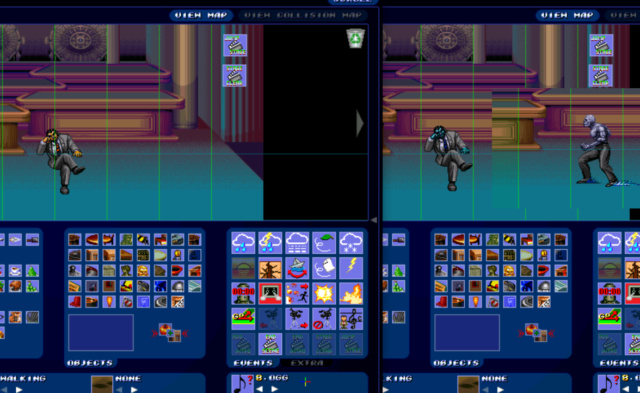 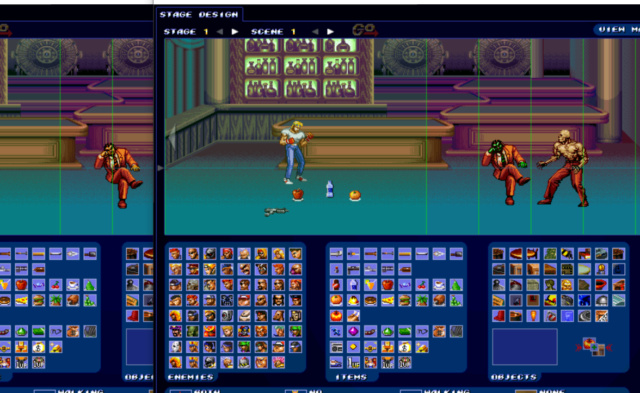 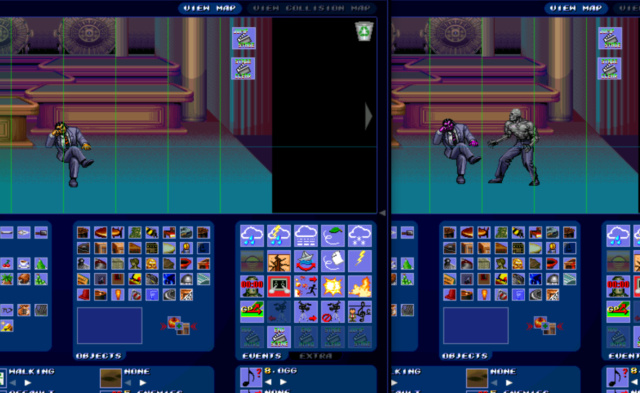 Not a bug. In the readme: 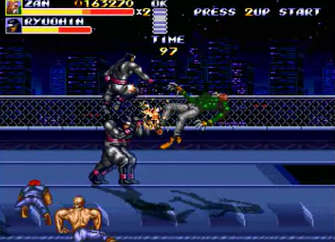 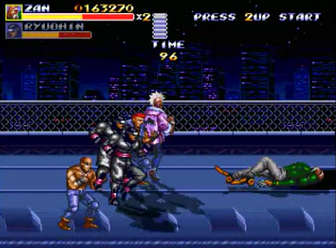 The Donovan climbed onto a spot where he is completely invincible and cannot move at all. Even my dying, sending him to the ground, would make him standup in an area where I could not hit him.

when player has a gun, but animations are disappeared

I found a small bug, when player has a gun (uzi, ammo) but there is no animation that the character grabs.
I saw other weapons (pipe, pepper, baseball bat, bazooka) are still ok, but if character grabs a gun and stand then it's fine but if the character runs or jump... the weapon is missed. (only animation missing. fires/ throwing still works.)
But player still use their gun, only animation looks weird.
This bug doesn't appear in 5.1 ,5.0 version.

Thank you for reading and sorry for my poor English.
Have a nice day~

I've found a small bug. When playing with the cpu, and starting new game, there are enemies carrying a pipe/knife/wooden bar, that you can't see the weapon carried, unless you hit them and make them lose it. Then is visible in the ground. Once it is picked up again, it will become invisible.
EDIT:
I'm running the game on MacOS, and maybe it has something to do with it, but had been runing SORR on the same system since 5.0, and also 5.0a & 5.1, and never had this graphic issue.

jahong201 wrote:I found a small bug, when player has a gun (uzi, ammo) but there is no animation that the character grabs.
I saw other weapons (pipe, pepper, baseball bat, bazooka) are still ok, but if character grabs a gun and stand then it's fine but if the character runs or jump... the weapon is missed. (only animation missing. fires/ throwing still works.)
But player still use their gun, only animation looks weird.
This bug doesn't appear in 5.1 ,5.0 version.

Thank you for reading and sorry for my poor English.
Have a nice day~

I don't know if sormaker bugs can be pointed too, but this one it's present since 5.1 already.
Galsias 1 with holding a knife and using the shadow intro they don't make the intro, they just appear out of nowhere.

I don't know if there is any galsia 1 with knife in the original game any-route to check if it happens too.

Not so much a bug as a suggestion to remove an exploit: under SoR1 and SoR2 weapon settings, certain characters (Blaze 1/2/3 with a knife, Axel 1/2/3 with a sword) have a fully invulnerable weapon special. Normally, it's supposed to drain health with each use even if you miss with it on SoR3 weapon setting, but it can be abused for safety under SoR1 and SoR2 weapon settings. I'd suggest making weapon specials cost your special meter as a potential workaround to avoid Axel grabbing the sword at the beginning of the SoR1 board stage and just using the weapon special through the whole game. It's a bit cheesy (and it's wildly effective), but the other option is just don't abuse the damn thing and throw the sword away after a few uses.

Or, remove the invulnerability from weapon specials under SoR1 and SoR2 setting. I'm not sure how many have this (Roo's knife special doesn't but I think Skate's pipe special does).
_________________
Youtube: BareKnuckleRoo   /   Twitch: BKRoo

I am running SORR 5.2 using Wineskin on my Macbook Pro (High Sierra 10.13.6). I believe I setup the wrapper correctly but I am experiencing a few issues that I'd love some help with! I've only played one full run of the SOR2 route but anyways...

The game frequently slows down when I play using the "3X Normal" video setting in the widescreen mode.

The game freezes completely when I try to play fullscreen. This is a big bummer!

For some reason, the audio won't play through my bluetooth connection. Sound will play through bluetooth from other apps (youtube, spotify, etc) but not SORR.  The SORR audio still plays through computer speakers only.

I had this minor weirdness where Onihime & Yasha used their team attack but somehow I staggered one of them during it, and they still pulled it off: