Since I couldn't download the 5.0a update from the download links provided in this forum... I looked for it somewhere else, in Azureus/Vuze using the "Swarm discoveries" feature, and I can't believe what I found... A NEWER UPDATE!!!!  It seems it's another testing build but it's pretty good xD

If you believe that it's a fake update, check it by yourselves, I have uploaded it to mega for you, guys, sharing is caring

Well that is interesting, and certainly a blast from the past.

Link is safe and works people. Might as well grab it if you can.

Yep, it's legit, new AI options, KO counter, some new graphics for Max and some nasty bug fixes. That's what I've saw for the moment. 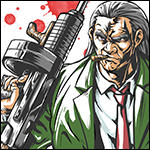 It  also has a save game function for mods built, in and the ability for the CPU to join you, for better or worse. It has a "waiting" feature after the CPU fell into a pit one too many times though. However it rejoins the next scene, thereafter. Overall seems to be nice update.
_________________

omg that bugfix list...almost everything I'd wished for

No sign of custom palette fix for SORMaker testing though, or for fixing Dr. Zero's name (it's uneditable still).
More paths in/out of route 1/3 and a 4th ending (for route 4) would be nice too but I guess that's asking for too much :p

Okay... guess it is time to get back to the modding scene at full. Must make all my mods completely compatible, functional and using all the advantages this patch has!

Yep, this is the real deal. There are tons of cool new features in this!

This is something that I just found not too long ago.

Saven wrote:Yep, this is the real deal. There are tons of cool new features in this!

This is something that I just found not too long ago.

That's an even bigger patch than the last one that was found!
So many bugfixes and features! It looks like the game was still being improved upon.

There's been some changes to some stages too, the most noticeable for me was this: 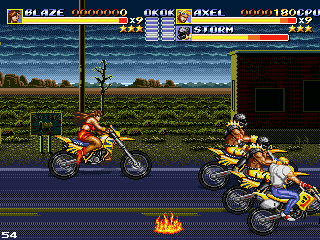 Wow very nice indeed. So many fixes there

The blue to yellow platforms change i see in the bugtrack is very interesting. Opens doors for quite a few creative things to do in scenes now for modders. Tempted to dust off MSPaint and give my mod an update with these cool new features.
_________________
I don't suffer from insanity. I enjoy every minute of it.

This is fantastic! Looking through the bugtrack, there are so many improvements and new features, you can lock another mod and only have it unlocked on completion of another. This is like having bonus content! I might add this to V4 Remake so that you can only play Rudra's Story when you complete the main mod. Nice

I will go through the bugtrack and group all the new features together when I get a chance and will post here.

Please discuss the Streets of Rage Remake v5.1 build that was found recently in this thread:

Please take some time to read the bugtrack to see all of the bugfixes, game improvements and new features of the v5.1 build.

We will add additional download links soon for those having issues with the MEGA link.

Here is the full bugtrack:

I've separated out some of the main new features here, mostly, they relate to new additions to Sormaker:

New Sormaker Features:
Added CPU friend menu for Sormaker, CPU has been improved to work properly with mods (may cause problems with very complex maps).

Added "waiting" feature if CPU friend dies several times by falling into pits in the same scene. CPU friend will automatically rejoin when it is safe to do so (end of scene, start of next scene, or if you perform CPU friend call).

CPU friend "Waiting" can be disabled by performing the CPU friend call.

Sormaker : SOR3 exceptions now changes the behaviour of pits, you lose a portion of life instead of dying (this disables cpu "waiting" feature).

Added savestate feature for Sormaker mods.
- Each mod has 1 slot, can be loaded from Sormaker list (New / Load).
- Cpu friend previous configuration will be ignored if you load a savestate.
- Savestates are created each time you pass to the next stage.
- Savestates will be removed if : Stage 1 scene 1, Gameover, Mod completed.

Added star icon on the Sormaker menu when the mod selected was completed (credits.png has been viewed).

Added mod unlocking feature, if you want a mod to be locked:
- Create a .txt file with the name "unlock.txt".
- Type the name of the folder of the mod you want to lock (e.g. "Prototype")
Sormaker : Added extra portraits feature.
- Create portrait.fpg inside the script folder on your mod
- Use sprites from number 500 to 799
- Portraits should be 44x44 pixels in size
- Use SORR portraits as always (no need to be added in portrait.fpg)

Improved the cutscene frame border, when set to 0, it will be invisible, but will return as soon as a portrait is displayed.

Sormaker fix : Stage clear had a black screen if it was combined with an End Scene event.

Sormaker : Multi-platform added, you can now walk from yellow to blue (players ONLY, for enemies, yellow will be like blue).

Sormaker Tweak : now enemies can drop food or items when set to manual on elevator scenes (be careful, only 10 items max. on screen).

Sormaker : You can now test from the Sormaker editor with a cpu friend, simply create a file called "cpu" in the main mod folder.
- Axel, Blaze, Skate, Max, Adam, Zan will be on screen from the beginning.
- Unlockable characters will use the continue option.

Sormaker : You can now cancel an in-game custcene by pressing the series button twice (it will not call cpu friend while cutscene is being cancelled).

Sormaker : Added new cutscene properties for animated fpgs.
- Use control point 000 to align the animation, use set center for default.
- Use X control point 001 for animation speed (starting form 1, default : 8, except frame 1 which is 0 by default).
- Use Y control point 001, set to 1 to stop animation, set to 0 to continue (it will repeat if reaches the last sprite).
- Create a file in the script folder with the name "1", "2", "3", "4", "5", "6", "7" if you want a new default animation speed instead of speed 8 for all cutscenes.
- However Control Point 001 has priority over the new default speed, so they can work together.

Sormaker : Added conditional ending.
- If the stage is called stage1a.fpg, create a file called "stage1a_end". (no file extension)
- It removes life bar, player, timer, elevator sounds.
- It starts the elevator automatically, to create scrolling endings.
- If a conveyor belt is detected, the scene will change when the cutscene ends.

Here are some of the main other additions and tweaks that have been added (excludes bugfixes):

Added store points on gameover (NOT Screens of rage), so you can now accumulate store points without having to complete the game in full.

Added easter egg on Stage 2 Scene 7 (jump the barriers on the top of the train without being hit).

Added extra items if you beat all 22 Robot X in the laboratory.

Now store points will always be shown, even when everything has been unlocked.

Savestates will now save the equipped weapon or gun if the cheat keep weapons between stages is enabled.

Several fixes on yellow colour (platform of collision map, however NOT recommended for general use, use only for upper platforms or learn how it works).

Added enemy count from BK2, press A button on the pause menu. Unlike BK2 it will show scores for both players (including cpu friend) no matter who presses A (not present in Battle or Volleyball modes).

Tweak : Enemies on Bike and Jetski stages will not have their lifebars increased depending on difficulty, they will remain the same.

Stage 6 Scene 6 tweak, now the bike stage is an alternate route, you will receive some bonus items on the next scene if you take this route.

Tweak : On jetskis you can no longer hit the other player by doing dash moves or bounce by touching him, this helps to evade harmful objects.

General tweaks and fixes.
- Max Hammerpunch does more damage when you hold B (24 vs 16).
- While doing Blaze katana blitz you can grab enemies now with no weapon penalty.
- Removed some invincible frames (e.g., Abadede running, RobotX smoking animation).
- BKIII Blaze now does 2 hits on the last kick of the combo (damage value four + eight).
- RobotX will laugh at any character invincible frame in the lab stage (defeat all 22 is easier now).
- Increased damage of Elle's => + A (16 to 24).
- Barbon will now always attempt to throw the player to the area with more space.
- Roll is not 100% invincible now, only 3 ticks at the beginning.
- Enemies will attempt to eat food only if they have life bars over 72HP.
- Fixed Max back grab jump throw on characters (was 62 instead of 70, on enemies it was correct).
- Zan front throw damage tweak (24 to 34).
- Zan back throw damage tweak (28 to 30).
- Electra Sor3/Bk3 will stand up faster if the player is not around, or if she lands off screen.
- Added ground reflection on SoR2 Back Alley.
- Monalisa can now jump diagonally.
- Added a delay to enemies to turn left or right, which could help to grab them from behind (e.g., similar to SoR2).
- Made bullet collisions a bit more precise.
- Some fixes to physics when enemies or players hit the ground, fixes some speed problems on pits as well.
- Some tweaks to the throw distance of some characters.
- BKIII Axel's Grand Upper launches enemies a bit higher now.
- During a police call enemies now walk instead of standing (only if they have the animation).
- Elle will now hit once with the kunai or broken bottle instead of twice, same damage: 12 (6+6).
- Now you can call police while getting hit.
- Some tweaks and missing hitboxes added to Abadede.
- Fixed Ash cry animation.
- Improved hit collisions of Jet/Rocket (some hits won't knockdown when flying, included police).
- Enemies can block a maximum of 3 hits every 5 seconds now, there was a problem where they could stop blocking when having several life bars.
- Fixes to Bronz/Silver/Gold throw.
- Using Elle, sometimes enemies can get electrocuted by throwing other enemies into them.
- Fixed a collision problem with enemies thrown against breakable objects.
- Grab range for enemies improved.
- Hit collisions when the player is moving an enemy during a grab improved.
- Enemies will not fall if a player falls from the sky while they are in a grab stance.
- Now players can safe land from a throw if they are in the air during a police call or after a boss is defeated.
- Enemies won't fall down now if one player does a police call while the other player is throwing an enemy.
- Added missing a frame on Haku-oh's back grab stance.
- Added missing a frame on Nora's back grab stance.
- Added missing a frame on Souther's front grab stance.
- Added missing a frame on Bongo's Sor1 back grab stance.
- Added new idle stance on Max.
- Enemy hit delay has been improved. (sor3 pause delay may work better now).
- NeoX can no longer shoot rockets while off screen.
- Fixed wrong energy life for Cody or Trucker on main game (hard or above).
- Improved Blaze Bk3 pistol animation.
- Improved Skate Sor2 pistol and machine gun animation.