(Eh, I guess this could work as it's own new topic as there are a lot of DD fans here).

To be honest, I'm not quite for sure how to feel about this, my feelings are pretty mixed. The NES DD2 sprites don't mesh in well with the backgrounds and looks like a fangame. At the same time, I would've preferred a continuation of either Advance or Neon in terms of gameplay (Advance mainly, that is the most fluid gameplay in the series IMO). And I guess I'm getting bad vibes from it being announced and then to say it's releasing only a month away, like there wasn't much to talk about.

But on the other hand, it is really nice to see the original arcade team come back to work on this game and then give the finger to Double Dragon III by making it non-canon. Still don't know whether or not if this is following the arcade series or the NES series (both are pretty different from each other in gameplay and story). I also like the idea of making a game retro like Mega Man 9 (I was sad that this idea never really took off), but found it weird they chose 8-bit NES over the 16-bit arcade style. Oh well, not complaining about that. I don't mind either or.

I would assume from the trailer that it's going to follow the NES games based on the look and gameplay. However, since the development team made the arcade DD1 and 2 games, it could follow those. I don't care either way I guess, but I would love to see the final boss from NES DD2 make a return, so please that lol.

I'm still probably going to get it unless it has a really negative reaction like that DDII game on the 360 awhile back, but I hope we can get another trailer before the end of January next year. I would like to see more from this.

Oh and please, none of this bullshit in Double Dragon IV please. So many lives lost in sections like these: 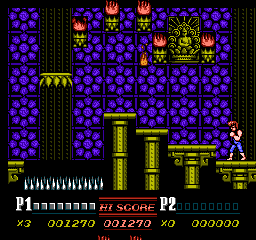 Just one question: WHY NES STYLE?

The arcade spriting could have work better. Hell, lots of OpenBOR projects look more refined than this...

oh well, hope gameplay-wise is good. Not particularly thrilled with the NES style, I am and I'll be always an advocate and fan of the original arcade style (hence my DDII mod).
_________________

Love how gloriously 80s that trailer was.

But yeah, that was more promising than the other trailer. Still don't like some of the looks of some stages and it feels like a cash in still. Hope I'm wrong next week.

Saven wrote:Love how gloriously 80s that trailer was.

But yeah, that was more promising than the other trailer. Still don't like some of the looks of some stages and it feels like a cash in still. Hope I'm wrong next week.

Better than DD3 and NES DD1 at least. It was worth it at the price it was listed at, but it could've been a lot better.