Thank you. Winrar was the problem sorry.

I finally found the missing tracks from this mod that I always wanted to have, so now it is the time to tell that I did a small mini update into this mod.

4 new tracks has been added into the mod, although there are still two scenes with no music (but this was intentional), and the countdown battle now has a music but only when 35 seconds remaining on that said counter, so when the time reach 0 the music also will end (except if you pause).

gameplay wise, I prefered to not touch anything to not break anything, but there is two small editions.
On the Chris Rematch (with the 8 westside gym goons) Christ itself have a regular "walking" intro while 2 of the minions now has a shadow intro, this way you won't kill 5 before "yasha" bother to start figthing you.

Later, on the Golem scenario, where there is a 1 up, prior to that part I added an apple (and extra food for the second player) so player don't need to rely too much on whatever the enemy drops to stay alive.

Rest of the game it's unchanged, but I found something.
if on the main menu > options -> miscellaneous --> type of camera SOR 3 --- the automated scenes (outlaws/shadow platoon destroying the background) will move in different speeds, I am not sure exactly the reason, but the thing it's, it happens (there is a few youtube videos when you can see this behaviour).

So if you are worry about that, place "type of camera SOR 2" to make these special scenes to go at the speed intended. <-- this can happens to other scenes from other modders, not just mine.

And that's it; the link in the main post should work, but keep in mind to not download the one that sais "viejo"; I will leave it for some time in case somebody report me that I uplodaded the wrong thing or I messed something really bad (only 4share; for onedrive there is only the updated version, hard to miss it).

In case of doub, you know that 2020 it's the year that I uploaded the .rar file.

So this is what it was all about, hmmm nice find about the cutscene speed.

Guess it's a good pretext to do another run of the updated version, isn't it?

Don Vecta wrote:So this is what it was all about, hmmm nice find about the cutscene speed.

Guess it's a good pretext to do another run of the updated version, isn't it?

Not like it will be that different, I discared switching other tracks around, although I realize that number 13 was used 3 times while others only once, but if I never notice it until now then it's not a bad thing.

Oh, I forgot one last change, that alone makes one scenario harder, but I won't tell yet

Cool BGM in the trailer video, I like it!

Blackblade34 wrote:Cool BGM in the trailer video, I like it!

Thanks, is part of the soundtrack of the game, one of the bosses use this theme as well.

mini update:
a second food was suppose to be to the second player, but I forgot to turn that option, now fixed.

And I took the oportunity to make a final reference in the final battle. The player now start with only 1 hp, so now, like in the original game, the boss can kill you in 1 hit.

At first, I thought if this MOD wasn't based on any other games. However, after checking it on Youtube, now I understand if this MOD was based on PS2 game with same name.

I love the gangwar themed game. To be honest, when I playing this MOD for the first time, it reminds me of PC game that I used to play several years ago, because that game is full of gang wars. However, I doubt if anyone has played it before.

Okay, back to your MOD. Although I didn't found any mistakes such default names, default palettes, or anything about it, but I found some "typo" on several mission briefing. Well, my English is not very good, therefore I don't care much about incorrect grammar or anything. But when I found any typo from your cutscenes, sure I will tell you. Here are the list : 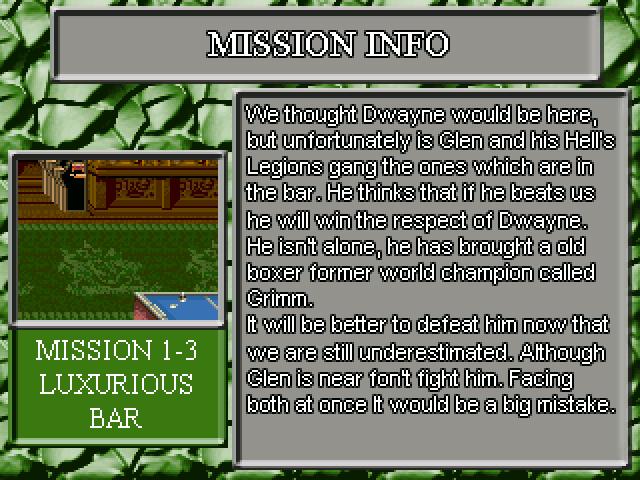 Although Glen is near fon't fight him (fon't or don't ?) 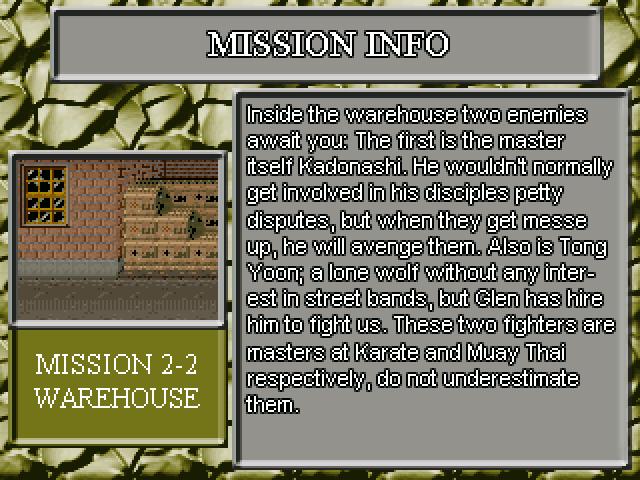 But when they get messe up (messed up?) 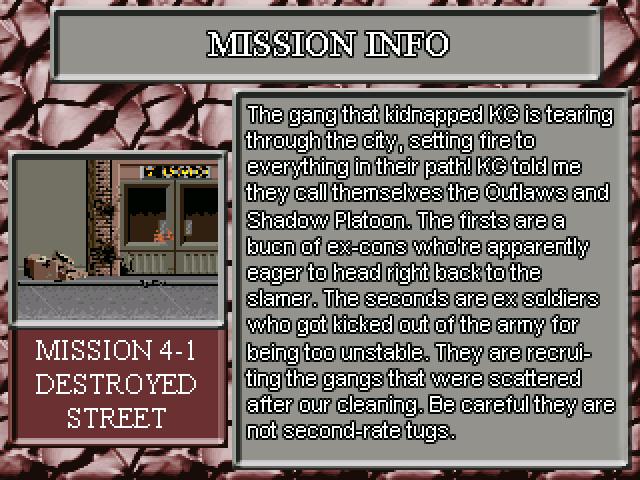 The first are a bucn of ex-cons (bunch?)

Be careful they are not second-rate tugs (thugs?) 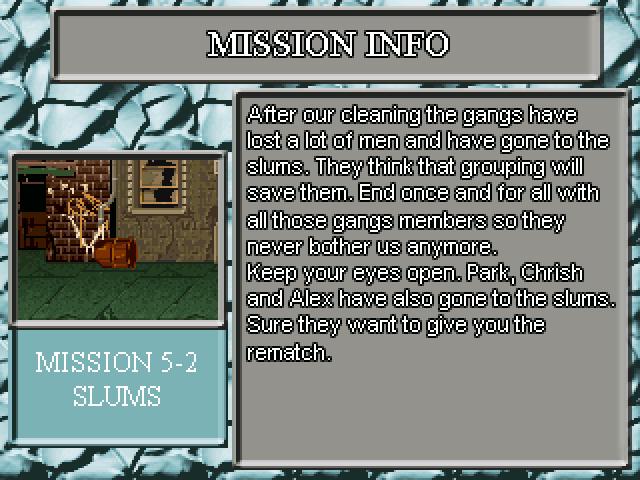 Chrish? Did you mean Chris? He was male in original game, but in your MOD, he was replaced by female character. Why you don't give a female name to her like Christina or something else? xD 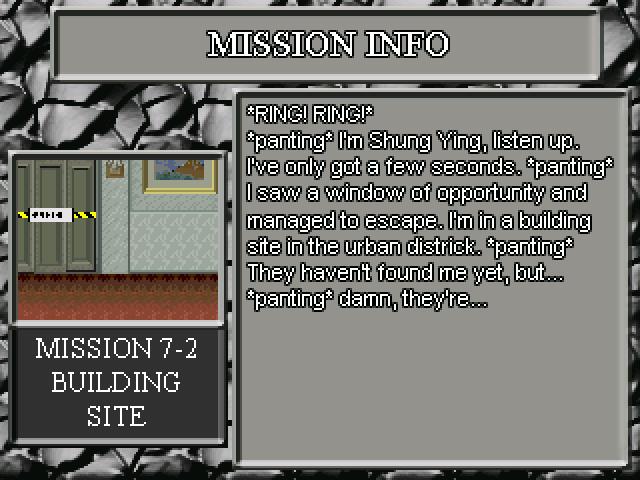 I'm in a building site in the urban districk (District?) 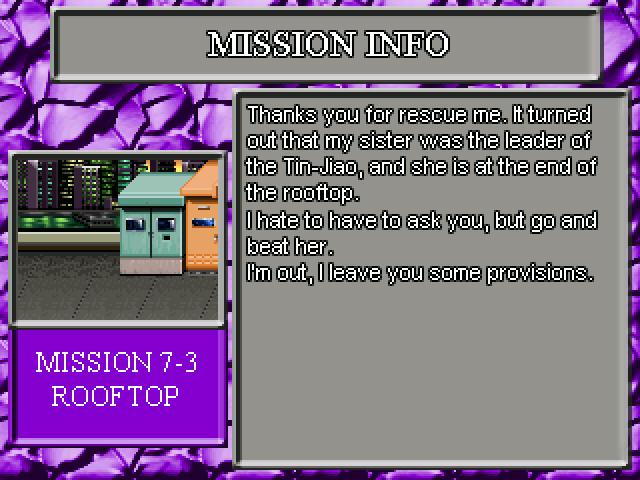 Thanks you for rescue me (Thanks? or Thank you?) 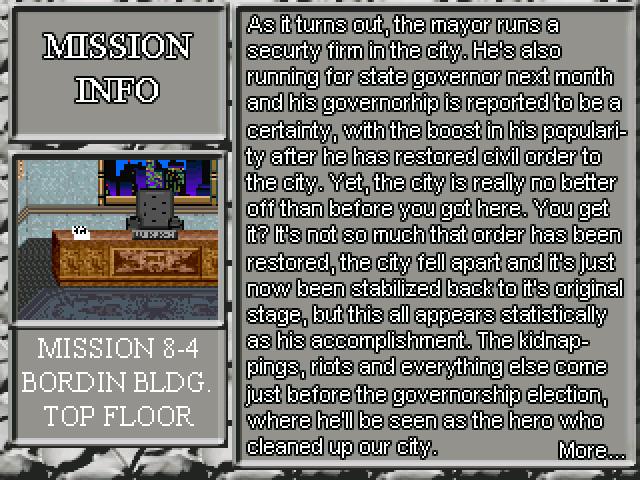 His governorhip is reported to be a certainty (Governorship?) 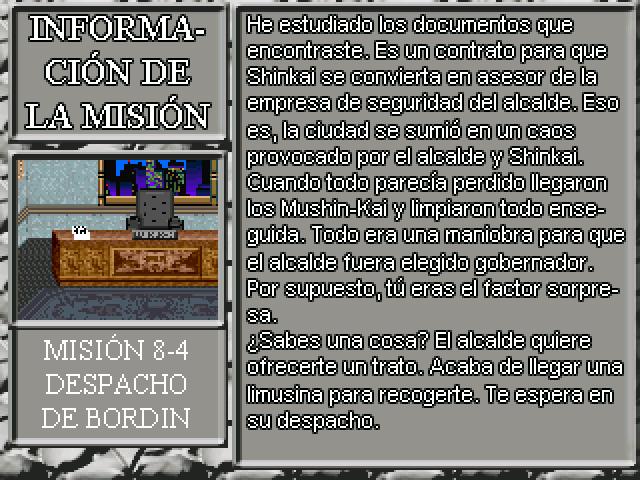 That's all I know. Thanks for the MOD. I like it

Search on your mod's game folder, there is a folder that say that, "1 scene non-script", you need to copy this into the main mod folder, it is a scene, not a cutscene, although it will act as one.


This is the one that made your last screenshot to turn into english.

Well, I got called a few times for the "missiin" instead "mission" typo, but this is the first time somebody report my other "engrish". Since english it's not my first language (that and I always play in spanish) I never got to catch all those mistakes.

Anyway, those are images and not a .txt or something like that; I don't remember the size or font I used, and even adding 1 single letter may alter the positioning of most of the text, so unless somebody wants to do the fixing for me I won't edit that part. At least I hope the core of the "plot" is easily understood.

About the game, yeah, it is a ps2 game, a frenetic beat em up, one of my favourites at all times. Not too much plot (and the briefings for figthing those guys half the time are dumb reasons), and it has a weird difficulty spikes/downgrades from time to time, but I made enough references from that game in here, in terms of the enemy waves (same enemies/names, or at least the basic with adding minions to make the wave harder) and even the mission info itself.

Even when Shun Ying sais that she picked you over Jake "because of how you looked" it is told into the original game, here I find it funny since you are compared with Ash.

For the record, this is not my first actual Urban Reign mod, but the other one was just a straigh copy of all the 100 missions on the game, so you fought the 100 missions (100 waves of enemies) in a single and repetitive screen, so I delete it.

After 3 years, had to replay it again. Always a great mod.