finally the second part is finished and ready to download

IMPORTANT
If you have installed first part of Sonic v2, then delete it and forget about it.

Installation:
Before installation make a backup copy of your data folder and palettes/enemies folder.
Unpack Sonic v2.rar in to your SoRRv5.1 folder.

I suggest you to play as Adam, Axel or Blaze and I strongly advise against playing as Shiva or Mr.X.

Any feedback is welcomed also any bug reports. 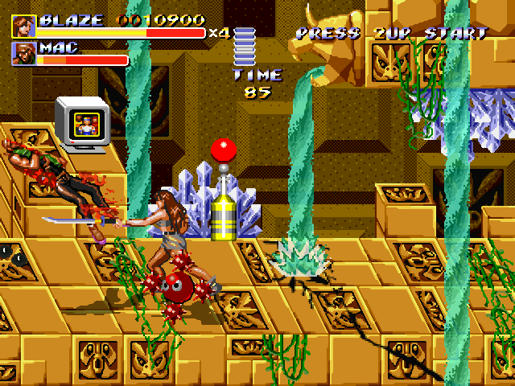 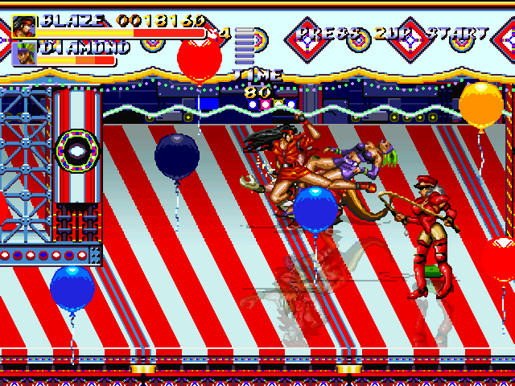 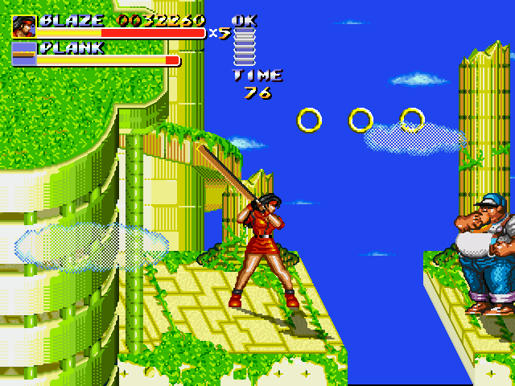 Hotfix:
Download only if you have downloaded mod before Aug 15, 2018 11:00 am, links above are patched already and you don't have to download this fix.
Paste this file in to SoRRv5.1/mod/games/Sonic v2 and overwrite it.
https://drive.google.com/open?id=1HWGty4BCx2iguJOZIhJX0oW3t4BPI2R7

Below is screenshot from Hidden Palace S3&K which can help you if your screen stuck and you can't go back, especially if you are playing with cpu. 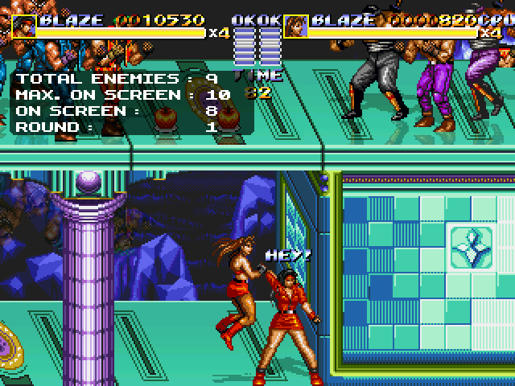 Stand at the bottom as close as possible to the wall and then call cpu friend.
Now you should be able to go back to the very begining.
Warning, don't go to this spot if you killed already all the enemies or you get stuck.

Nice, looking forward to it.

Each mod will have new levels that had not in the old mod?

Yes, I have a lot new ideas, so all stages, each scene will be rebuild and one new stage is in my future plans (Sky Chase), also I want add some scenes for example in genocide city, the first and second scene will be longer, third will be completely new, and third scene from old version will be as fourth of course with few changes. Besides in this version almost all sprites are ripped again, so overall quality will be better.

Cool that you are working on this again. You should use the new custom portrait feature in the final mod to add Sonic etc. Keep up the good work

GREAT! I'll edit this post when i have finished with this mod to let you know my thoughts, but, it looks really good.

Where's the news of the project? We wait very mutch for this.

This new version looks great, but i have one question: when your complete the other 2 parts of the mod you planning release the whole complete mod together? or they will still stay separated?

I want to keep this mod as one. About second part, at the moment I didn't do anything bigger, just small things that's the bad news. The good news is that I have a lot of free time and slowly resumes progress.

Can't wait for you to finish this

My wife and I are addicted to your Streets of Rage/Sonic crossover Crystalix.
(Honestly it's by far our favorite of any SORR mod)

Meaning no dialogue, no slideshow clips. (Kinda like how the original Streets of Rage, and Sonic games didn't have boxes with text)

The first few stages display the level segment titles as they would in the respective Sonic Game. Ex: Green Hill Zone Act 1, Act 2, Act 3, etc. (Of course the credit goes to Crystalix obviously, I love the details, and tributes to the original Sonic games)

Once it gets to the fourth stage these titles start to tie into slideshow clips, and I have no idea how to change the coding so that I remove the dialogue clips, and text boxes without also removing the specific title card of "Labyrinth Zone Act 2" for example.

(Can anyone help me with this? Oh and as a side note I'm keeping the ending credits intact with grammatical corrections)
This is what the coding for that instance in particular looks like:

I guess it's a dead end.

I played again to the v2 of this mod, and it's still excellent! The animated cutscenes are great, the customized breakable objects really add to the ambience, and the new moving scenes (falling platform, etc.) are amazing.

Besides, some little things:
- the musics stop at each end of scenes, it is too bad because it breaks the fluidity of the game,
- the end stage jingle is very low quality compared to the other musics,
- too bad there is no customized palettes and names for the enemies, it could be so fun,
- will you add the missing levels from the 4 Sonic titles (Sky Chase, Hidden Palace, Sky Sanctuary, Doomsday)?

Hi, thanks for the feedback and sorry for such a delay, unfortunately right now all progress is paused but I hope I'll resume my work soon. For any news in the future check this topic: http://www.sorrcommunity.com/t442p25-my-playground
_________________

That sonic character looks great, where can I download?

When is the final version of sonic v2 going to be released?

justjamie wrote:When is the final version of sonic v2 going to be released?

crystalix answered this question two posts just up to yours...

When is the final version sonicv2 mod going to be finshed?

The final version, really hard to tell but if we are talking about the second part i'm working on right now, I hope for a month but I do not promise anything.
What will be new in the second part:
-stages
-carnival night (done)
-genocide city (done)
-launch base, two new scenes (done)
-hidden palace s3&k (working on it, 30% done)
-sky sanctuary 0%
-hidden palace beta 0%

Ah, hello Crystalix. This is my first time to talk with you. I love your Sonic MOD. Even my older brother was shocked when I played it. He said : "Huh? It's a sonic. How could you playing it on SOR?"

I'm glad if you still active because I thought if you had gone forever and abandoning this project. Let me know if you have finished this MOD

Nice! I'll check it out

I've finished playing your MOD. It was so cool. Even my friend like it ^_^

Well, if you want, you can watch my video in here :

By the way, I want to ask something. Why most of the stages from previous version didn't appear on this new version? I miss those stages

Oh, I forgot something. About your link above (Mediafire), the file is corrupt. You need to reupload it again

I'm glad that you and your friend like it.

The missing stages will be in the next parts, in the third part there will be all levels from sonic 2 and in the fourth part will be the remaining ones.

So, I discover very late this part2/4 of your Sonic v2, I don't know why I didn't see the topic early, maybe because you just reuse an old topic and change the title...

But I played this new version several times, and it is huge!
Good points I noticed:
- Super Zamza! So, this is the fourth mod to customize enemy sprite, and it is a so good idea to do it in that way! When I started to fight him on the roof, I realized "Hey, there's something wrong..." Cunning man you are! Unfortunately, Zamza has the weird particularity to not walk, only jumping or running (and this one only before doing his slide attack), so when I saw him running toward left, right up and down, I understood the trick. But what a good result! And it opens an horizon of possibilities (even if it's very complicated).
- Robotnik/Jet! The illusion is perfect.
- Breakable screens! and breakable Sonic enemies! and even savepoints! But sometimes, the screens are empty, weird...
- Platforms! You did an incredible job with the collision maps, full of stairs, rooms, walls, secret paths. This mod is almost a platform game, and I was never blocked because of the camera, well done!
- Roo/Sonic heroes: it's very special to play with this customized character, and I don't think I will be able to finish the mod with him, but it's very fun, so good idea to put it as a bonus.
- Genocide City: still my favorite stage, dark, perfect mix between the two universes (even if I think you should put more than two corpses). The inside building is briliant, nice creation.
- Jewel sisters: I really like them, nice way to play with the palettes.
- Scenes with the collapsing and falling platforms.
- Cutscenes, especially the ones with Shiva killing the Jewell sis or the heroes.
- The 1-8 background with Robotnik giant face in the sky. It was already nice in Sonic, it's better here.
- Customized lasers with robotnik lasergun, but very dangerous because I often forget them!
- Customized police! The one with super sonic, and the one from Sonic Heroes... damn you, now I don't know which one I have to choose...

Some questions:
- Why don't have some SOR enemies with adapted palettes and names on Sonic universe? It could be fun.
- Too bad the music stops between two scenes, during the title scene, because it breaks the rythm.
- It seems there are some screens with life that are only in the background??? (1-2 for example). Is it just to frustrate us? :p
- The portait of Sonic is always the same, smiling, even when he's talking about sad or dramatic things. Isn't it possible to add some other expressions, like faces of SoR heroes?
- Isn't possible to change the Roo face on the select character when it is replaced by Sonic Heroes?
- Do you plan to replace bonus coins by rings? Or even all the bonus points by rings? I know they won't be able to turn like real rings of course.

Thank you man, and I am waiting for the next. Once finish, this mod will be one of the best and huge mods of SORR!

- Will you change the SORR background title and select characters background too? Like recent mods?