Dunno if anyone else has noticed this or not (as I didn't until today), but doing a forward-A blitz (energy ball) while holding a gun results in him firing 3 bullets without depleting the ammo...even if you've used it all. (just like X's forward-A special)

Sadly guns aren't common enough to make much use of it, and naturally it leaves him vulnerable to swarms etc. as with any weapon. (moreso with guns cos of the auto-Y move when too close to someone)

DarkThief wrote:Dunno if anyone else has noticed this or not (as I didn't until today), but doing a forward-A blitz (energy ball) while holding a gun results in him firing 3 bullets without depleting the ammo...even if you've used it all. (just like X's forward-A special)

Sadly guns aren't common enough to make much use of it, and naturally it leaves him vulnerable to swarms etc. as with any weapon. (moreso with guns cos of the auto-Y move when too close to someone)

Yep, works the same with both gun types.

Just tested this - he is not firing the gun he's holding. What's actually happening is he gets an alternate Blitz Special (->, ->, Attack) that actually replaces his exploding fireball! It costs meter/health to use just like the fireball does, so basically so long as you're holding a handgun or smg, your exploding fireball special is changed into an arm cannon. The animation for him shows him actually shooting the bullets from his arm, so basically if you can hold onto a gun, even an empty one, it upgrades his Blitz Special into a more damaging one (that you can't hit yourself with either, unlike the exploding ball). It seems to work pretty much like Mr. X's offensive special, except it doesn't knock down enemies at close range. It's still hard to hit with, though. 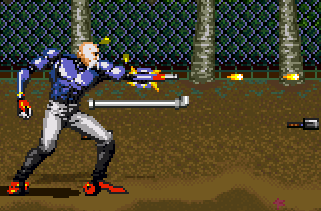 Very interesting. Does he have a Blitz Special with a rocket launcher too? Holy ****, he does! When using a Rocket Launcher, his Blitz Special is replaced by a new special attack, a double rocket blast he fires using a cannon in his elbow! It basically fires two exploding fireballs in a row, and each one seems to do double the damage of one regular fireball!

Zan's moveset should be appended with the following:

When holding a Gun or SMG:

Zan's regular Blitz Special (Forward, Forward, A) is replaced by an arm cannon attack. Instead of using his explosive orb attack, he transforms one of his arms into a machinegun and fires three bullets in a row in quick succession, much like Mr. X's special. Does decent damage, can be tricky to hit with. So long as you're holding onto a handgun or submachinegun, regardless of the ammo left, your Blitz Special is replaced by this move. This alternate Blitz Specia still consumes special meter/health like other specials do, and does not use up any ammo in the gun itself.

When holding a Rocket Launcher:

Zan's regular Blitz Special (Forward, Forward, A) is replaced by a modified explosive orb attack. One of his elbows opens up to reveal a cannon and he quickly fires two explosive orbs in a row. Each one does double the damage the damage of a normal explosive orb, and because he fires two of them, it's generally easier to score a hit. Rocket launchers tend to be rare though, and they can be difficult to hold on to as they disappear when you drop them three times, like any other weapon. So long as you're holding onto a rocket launcher your Blitz Special is replaced by this move, regardless of the ammo left in the launcher itself. Using this modified Blitz Special still consumes special meter/health like other specials do, and does not use up any ammo in the launcher itself.

Maybe it's just been a while since I've used Zan seriously, but has his offensive special been upped in 5.0a? I remember it being kinda iffy, but it's actually not too shabby in damage when you score all the hits for such a long range attack. He moves really damn fast with that 0 star blitz, you almost want to spam it like how Max spams his sliding blitz for speed. Zan's not great on damage for most of his moves, but damn he's got fantastic speed and reach on anything that's not a jumping attack. He seems to get the most special abilities when using weapons, too. Is it just me or is he probably the best all-around weapon user in the game?

I have never noticed this. I will need to check this out the next time I play V5. That looks pretty fuckin awesome.

As far as his fireball throw that he does as an alternate special while dashing, I have always found it to be pretty useful in both versions if it makes contact with an enemy. It's a great way to knock off a big group of them from ganging up on you if there are too many.

Had to recreate an account because I can't remember the old one's password and the email address is gone. Oops!

Was messing around today in what I thought was Hard or Very Hard mode, SoR2 Route with Zan. Default life stock settings, beat Mr. X with no continues used, x1 left on the life counter. Turns out I cleared Mania without continues as Zan, holy cow! And this was after several bad deaths during Jet fights (in Stage 2 no less!) and during the baseball dome elevator sequence.

I only got hit ONCE during the SoR2 Shiva fight - if you use his three star blitz from afar, moving horizontally at Shiva, it easily baits him into running into it and basically outprioritizes his possible attacks. Utterly ridiculous. Also way too easy to bait Abadede into running into Zan's blitzes. Zan's blitzes are such a massive upgrade from the weird multi-dashes they were in SoR3. He's quickly becoming one of my new favourite characters alongside Adam, because of how ridiculously high priority a lot of his attacks are. It's just a shame I really can't get the hang of his jump attacks, they just don't seem to have enough reach to be reliable in a lot of cases. Jets are always troublesome, and it sometimes seems easier to diagonally 3 star blitz into them, hoping to hit them...

For the Jets just go jump down attack ad nauseam, they eat two of three hits per attack since their airborne status no longer knocks them down.
_________________

Yeah, it's quite weird that the least damaging 3-star blitz in the game is actually the strongest. (with diagonal running it's unbeatable...even against X you can deck him without life loss if you get him off screen)