About time we deliver a thread about the flamboyant diva.

Spoiler:
Ash doesn't have the usual police call, meaning he can use his technique in any scene (once per life, of course) 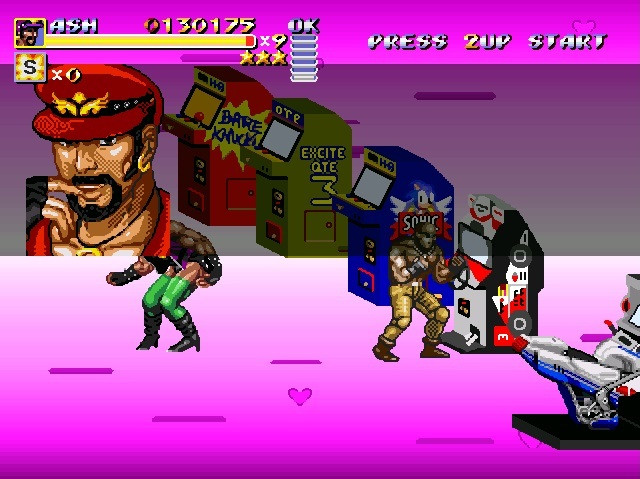 The beginning of what I'd like to call... THE PELVIC THRUST OF DOOM!!!!

Ash it's not an easy character to play with. He's fun, though, but requires lots of practice to do a good run in Mania with him. He's a character that could be defined as high risk high reward, has tons of strong points but at the same time tons of flaws. Let's take a look at his moveset.

Rush combo. Low to mid range, the first slaps are fast and damaging but the finishing Hammer Punch, while VERY damaging, lags too much and enemies can move or retaliate. Plus the biggest flaw it's the bad habit of Ash to recoil in a hop, where he's vulnerable. If you don't want to risk yourself too much you can finish off with either a Blitz 1, an A special (good damage), a back attack or a fA special... but the drawback is that the damage would be lot less.

High jumping. This is one of Ash's best advantage and disadvantage at the same time if you don't know how to control his air game. He jumps so high he's able to trump over most anti-airs (trumped Donnie's upper, Cody's upper and Hakuyo's high kick so far. Still pwned by Bear's Dudley upper). Damage of his attacks it's regular but due of his height he can prioritize several moves.

Back Attack. This KOF Angel's rip off kick it's actually quite good and makes fair damage. You could use it as finisher for a rush combo as an option.

Blitz 1. His hump attack it's actually reliable and while not as godly as Rudra's it's still good to get out from difficult situations. It's abusable and should be part of Ash's game.

Blitz 2. Certainly one of his best moves. Heavily damaging if the 3 hits land, great reach and also can hit enemies coming from behind. However, the start up it's slightly slow and quick jabbers like Cody or Galsia-2 can stop him on his tracks. Also, only hits mid range so won't stop airborn attacks like Big Ben-2's belly drop. Heavily abusable to clear out swarms.

Blitz 3. I really haven't used it well, will play some more with him and find out how useful it could be.

Grabs. His grab game it's decent and damaging. Due of his speed, you can pull out a CPU style of hit and run without problems. Get used to the fact that his front grab (grab > back + B) will slam his enemies in front of him and not the ones behind (unless they come too close) and that his back grab will throw them behind him cuz it's rather different from the rest of the other characters.

Front grand slam it's fine, good invincibility frames, fair damage BUT takes too long to recover in the recoil hop. While it's still unvulnerable, it can be a problem with enemies waiting you from behind. Also, non Bongo friendly.

His back grab does great damage and clears enemies behind. It has quick recover and enough invincibility frames, but as throw away grabs, not useful against grab recovery enemies (Judos, Shiva, Rudra, Roo) and non Bongo friendly either.

His pelvic hits do decent damage, so it's a good choice against Bongos.

Weapon game. Standard game it's VERY subpar. But his specials are overall quite good.

Knife. Mid range but quick thrusts. Overall decent.
Plank/Bat/Pipe. Standard moves are hideous! Slow start up (think of Donnie-2 swinging his pipe). Never try your luck against a Pipe Donnie-3 or Bat Galsia-1 could they'd eat you alive. His special it's lot more reliable, kinda like Max's without the double hit damage fest and plus, it recoilds from the attack (which sucks).
Sword. As horrible as the bat in normal attacks, but his special f f B it's VERY good. Great damage, quick, and reliable. So if you get a sword use specials only.

So, to summarize Ash's gameplay pros and cons:

In general, you must be very careful in playing with Ash, but then again, it's also a fun character. What I could recommend it's playing with him in lower difficulties to get used to his game and little by little hop in until reaching Mania. He's not the type to be played in Mania on first time because it's easy to feel overwhelmed.
_________________
/*
Autor : BoMbErLiNk
Grupo : BoMbErGaMeS
Fecha : 17 – 3 – 03
*/