For starters, no matter what controller I plug in to my PC it automatically gets set as controller 2. Once I get to the character select screen I can no longer use the controller. The game won't allow me to change any controller settings for player one, only player two. Also video settings for full screen don't save, I have to setup the video settings every time I start the game.

Anyone know how to get around this controller issue I would love to play the game but It seems broken.

SoRR v5 was made before Windows 10 and 11 were widely adopted. I presume since you've not mentioned what operating system you're using, it's one of those two, therefore you should be prepared to have to deal with some minor incompatibilities.

The controller issue is fortunately a trivial problem to solve. Just map all the buttons to keyboard inputs using JoyToKey: https://joytokey.net/en/ Because the game is entirely digital movement and not analog, it'll work perfectly.
_________________
Youtube: BareKnuckleRoo   /   Twitch: BKRoo

Easiest way I found to get the controls work pretty much perfectly was to add SoRR as a non-steam game to Steam which provides it controller support. The mapping stayed funny (few buttons were flipped around) with a DS4, so I selected 360 as the controller type and everything is where it should. While the HUD buttons are wrong now, I remember the placement of either.. And I'll look into fixing that too, or perhaps they can be remapped, but from the patch notes it sounded like the menu buttons might be hardcoded. Either way, could be the DS4 customization of Steam that basically makes it emulate xinput which could be the reason for the incorrect mapping. DS4Windows might enable proper mapping.. Either way, I think the built in controller support was rudimentary save for the added xinput support.. It's just that it doesn't seem to simply expect/interface with every controller as xinput and switch the buttons shown although that would've been simpler and more useful to most people I think.. Unless it really implemented DS4 support too, but I think maybe that is legacy and dinput based? But for me that wasn't working altho maybe with remapping it would have. But yeah, I might have spoken too much on something I'm still investigating, haha. The game rocks though, don't give up on it! As a childhood SoR player, I LOVE IT. 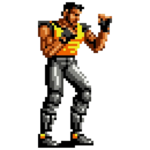