After an extended break, i'm happy to share another way to push the limits of SORMaker. While HEXing again with my level files, i was originally aiming to recreate the sniper attack on Stage 1 in Route 2 (Downtown). While in SORMaker we're limited to a single sniper attack firing exactly four rounds at you, in S1R2 you're getting shot at endlessly, until you've cleared the screen of all enemies.

While my initial endeavour proved fruitless so far, i've at least discovered how to place more than one sniper attack within a scene. More than that: You can actually have multiple crossairs on-screen at the same time - which doesn't add much challenge to 1P-Mode, but makes a noticable difference in 2P-Mode, since the crossairs actually move independently. I don't think even the main game had that.

Since this includes tinkering with the SMK-File again, i recommend backing it up beforehand (HxD will do so automatically). I also recommend making this modification right at the beginning of the level design, so we can eliminate any risk of changing the wrong entries.

1) We fire up SORMaker and create a fresh scene. We flip the events-tab to "extra", and place several snares to our scene, according to the number of sniper attacks we wish to implement. 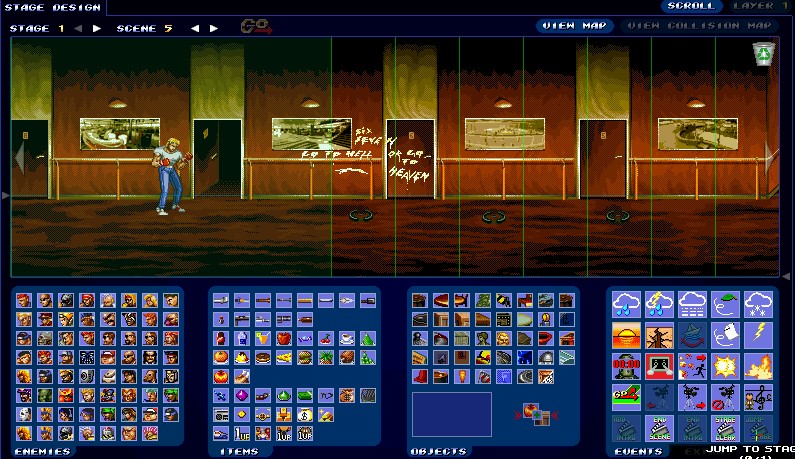 2) After saving the scene, we start our HEX-Editor of choice (HxD in my case). We open the SMK-File of our scene (stage1e.smk in my case), and search for the value 21 in the Hex-Area. That value represents the snares we just placed. In my example, we come up with three hits:

3) We replace all the values 21 with 77. In addition, we put in the value 03 in the adjacent fields to the right. Afterwards, we save the changes and return to SORMaker.

4) We flip to another scene (without saving anew), and return right away. The snares should have changed to sniper-icons. 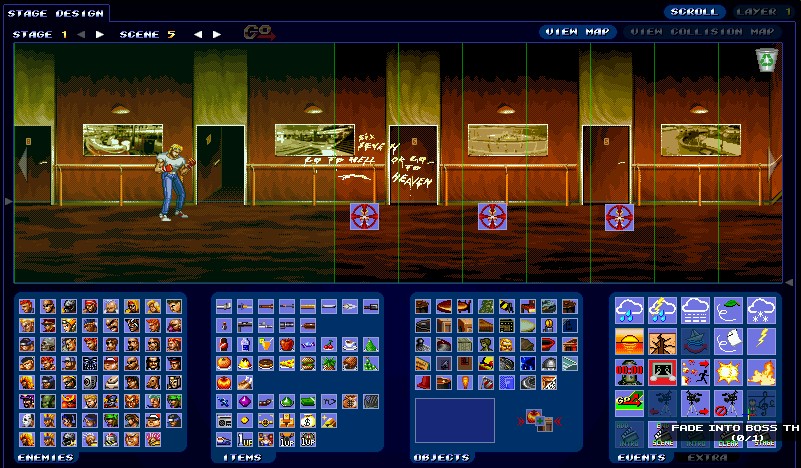 To make it work ingame, though, it is important that we move each sniper-icon around a bit - doesn't matter how much, but if we leave the position unchanged, the crossair won't be showing up ingame. Also, there can only be one sniper per row; putting in more will still only show one ingame. We save again, and start a test run. 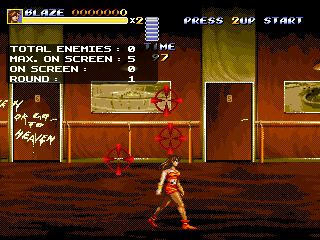 Oh my, seems like Blaze is not the most popular person around.

I'm not sure how far that method can be pushed without affecting stability. So far, i've yet to encounter any issues, but should you experience otherwise, please leave a reply.

Okay, wow... this is seriously interesting. In fact starting to do some hex modding besides the regular SORmaker methods will extended the limits we had (especially considering how little we had in v5.2).

The crosshair event will definitely work in a place when you're supposed to be haunted by gunmen or snipers. A limit of one per scene definitely takes the fun away but this will definitely add more challenge.

This is interesting so that's how you open up the SMK files, its hex coded. after having seen this tutorial, the hex codes can be tampered with and can alter things for SOR-maker and for the SORR game itself. good finding. and yes more gunmen on the map will make game mods more of a challenge, even for experienced players.

Thanks for the feedback, and there's already more to come: It turned out that the tutorial above can be applied to hack other events into your scene that would be limited to single use otherwise. Take "Trigger Cars", for instance:

You can use the identical steps above, but instead of 77 03, you put in the values 6C 03. That will enable you to put in more car traps to your scene, if you so desire. The icons appear grayed-out, but worry not: the events all work.

Or if car traps don't do it for you: How about multiple Moving Lasers? That can also be done, using the values 75 03: 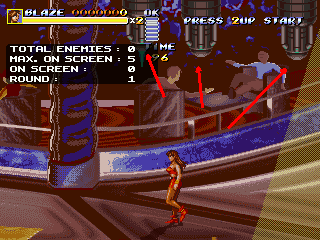 Multiple Rail Carts? Use 6D 03 to inflict some serious pain: 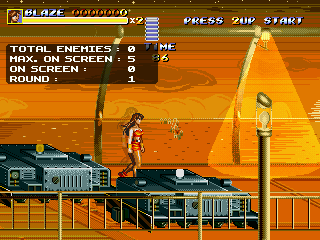 My favourite: You can even divert the "Boss Theme"-event from its intended use by putting in the values 0F 03. 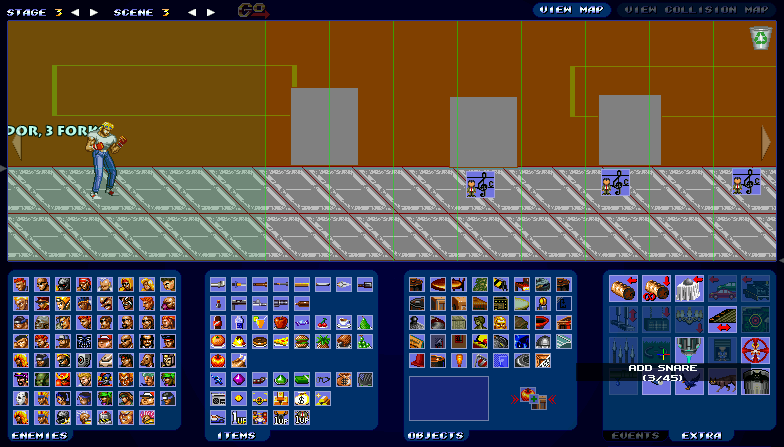 Despite being hacked into the file, all icons are fully functional, meaning you can change the musical track multiple times within a scene, not only when the stage boss appears. If utilized well, i'm sure that could be used to some great dramatic effect.

There's obviously more under the hood than the SORMaker-interface makes us believe, so i'll keep looking if there's more limitations that can be overridden through HEX-editing. I should consider compiling these infos in a comprehensive guide; but for now, i will leave it in this thread.

Speaking of limitations: Certain events and extras are lumped together in a group of 45 elements (see cursor-highlight in pic four). All these modifications will be added to that group, and as of now, i don't know if that's end of the line. It should be no big deal, though, since 45 elements should be plenty to work with.

Axle Stone 1991 wrote:Another cool thing you could look into is to how to add more than 9 layers to your SORR-maker map, using hex value in the SMK folder.

I'll see what i can find out.


Now: Who'll be the first to put together a stage in which you run from five rail carts and a moving laser while getting sniped half a dozen times?

Multiple boss music selections count me in!!
Theres been so many i wanted to change music multiple times

Certainly this is useful.

Now if could be a way to get more breakables/consumables per scene, this would be the best shit SORmaker can get because the scenes can be now more interactive.
_________________

Don Vecta wrote:Now if could be a way to get more breakables/consumables per scene, this would be the best shit SORmaker can get because the scenes can be now more interactive.

No luck on that one, i'm afraid. I was initially hopeful, since there's a value in Line 0003150 which expresses the number of elements placed. I put the maximum number of ten breakables in SORMaker, saved it, and set the value back to zero in HxD. That actually enabled me to place more elements in the editor, beyond the maximum number. However, none of those will actually appear ingame - neither breakables, nor consumables.

I was able to narrow down the lines in which the definitions are created, and apparently there's only space for a maximum number of ten entries; if i place more than ten objects in the editor, no new definitions will be created, since there's simply no space reserved for them. If it can be done somehow, it's beyond my current level - i'm no programmer, just a tinkerer who likes to figure out things.

Similar topics
» Enemy Attack Power/Damage Editing
» The Random Blabber Topic
» [HEX-Editing] How to extend a countdown to three minutes and spread it over different rooms
» What kind of area/scene would you like to see?
» Sor1 scene 1 remasterized