There is a tutorial for BOR style rips which is a good beginner's start. But for those who want a bit more in source material, I've decided to create this tutorial specifically for those of us who want to rip tilemaps & GFX pieces with MAME.

The version of MAME that I'm using in this tutorial, has the best tilemap viewer option, because it's not broken like in newer versions. You need to aquire MAME32XT Version 0.134. And while I couldn't locate an archive at the website it originally came from, I happen to still have (and use) that version.

Ok, so I shouldn't have to tell you, you need to get ROMs. If you do, do a google search on those. With that said, you're going to need a game to run, in order to get the tilemaps & GFX pieces (optional on the pieces part). In this demonstration, I'll be using D.D. Crew, a game I've already ripped out all the tilemaps from the game. As I plan on using it in my Street Survivors mod. It's one of the classic Sega Beat'em Ups, and it was something I grew up playing in the early 90's next to SoR, so it's only fair that I bring it some justice in SORMaker

When you run the game, and it loads the very first stage, immediately press F4 on the keyboard. This will bring up the Palette screen. As seen below. 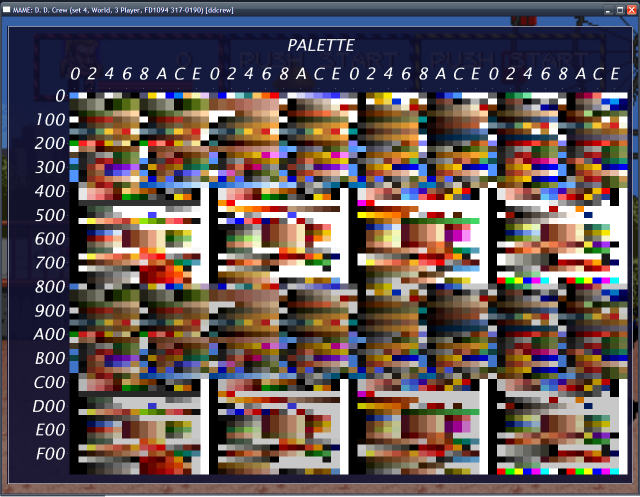 When you make it to this screen, Press the Enter key (Return key for some users), and you will then have access to the GFX layer. Which is always an 8x8 grid like setup. While in the GFX layer, if there is a specific sprite image you need, you will have to look into the grid, as it will be like a jigsaw puzzle. You can use the left or right arrow keys, to scroll through the different colors in the GFX grid that you may need. As seen in the image below. 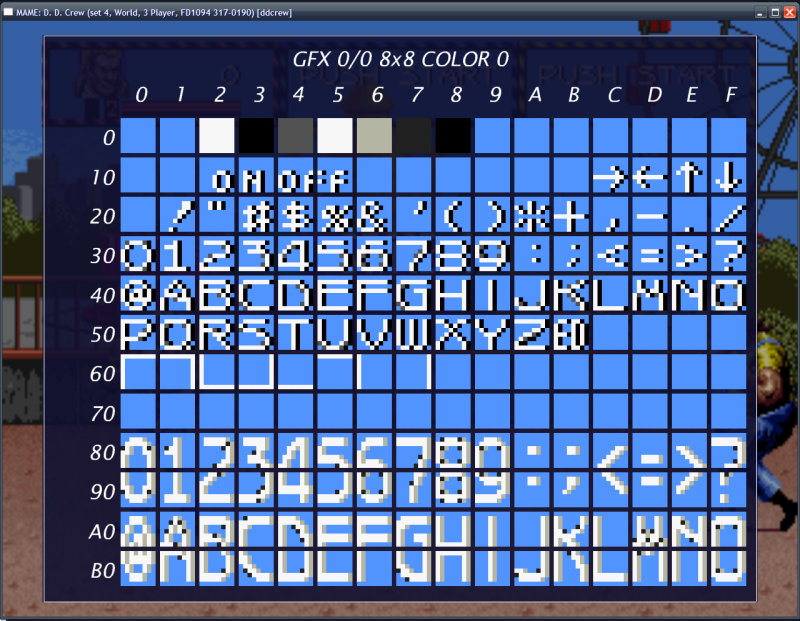 Pressing enter again on this screen, will bring you to the Tilemap area. In which it will always show the kind of layout in x & y position that it starts off by default. You can use the left and right bracket keys * [ and ] * respectively to scroll through the number sets of tilemaps that are used in a stage. Everything will be grouped together, or some parts will just be a background image. As seen in the image below. 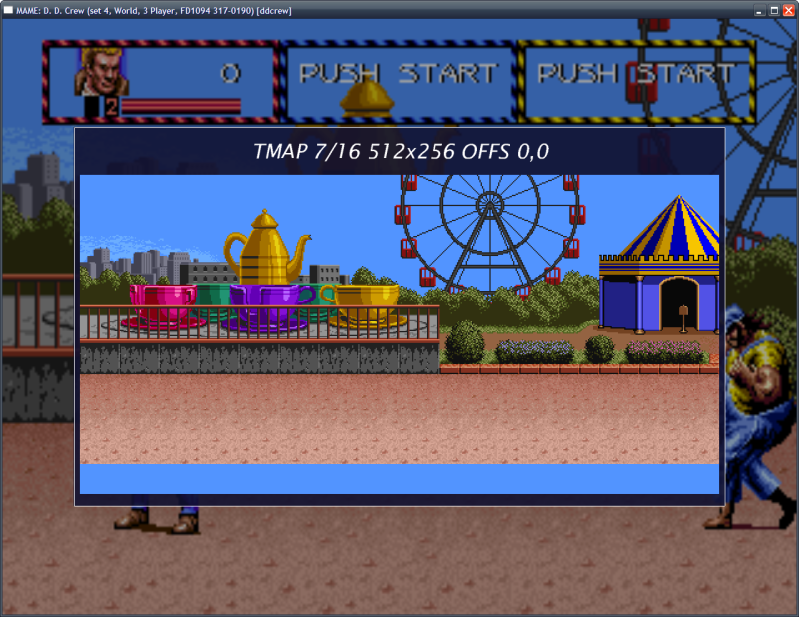 Take note that while in the Tilemap, GFX and Palette screen, the screenshot button in MAME turns off by default. There is no way to change this, as that is by design of the emulator. So you would need to use an extrnal screenshot saver/creator, in order to rip the tilemaps, or GFX pieces by the section. If you need to get the palette, you can use said external screenshot saver/creator of your choice to take a picture of the available colors, and use something like an eye drop tool (like the one found in gimp), to select the color that is on the palette, if you want to be diverse in editing. You are also able to move the image to any position by using the left & right arrow keys. And, if you need to zoom in, you can use the - and = keys on your keyboard, to zoom in on either the GFX layer, the palette layer or the TMap layer.

Keep in mind, not all parts are in a TMap layer. Some item specific parts that are attached to a stage, are in the GFX grid layer. And for this, you will need to either use Artmoney, and find the address by looking at the grid, or use your image editing tool to select by section (in my case, I use SnagIt version 7 to do all of this).

With the ability to rip things out of MAME, the possibilities are now endless. What game you use, will be up to you. But keep in mind, not every game will be easy to rip, and some layers all reuse the same position. Only advancing when you move forward in the stage, then press F4 to bring up the TMap layer again to get the shot you need.

If you need to rip games from Capcom or SNK, you'll need to use either Kawaks or FBA (FinalBurn Alpha). As those two emulators have a better tilemap & layer ripping system than MAME for those specific games. Otherwise, use MAME if you want to rip non-capcom or non-SNK games.

This ends the tutorial. I will update this as needed, if I discover any more tips and/or shortcuts for easier ripping from MAME. This is currently as good as it gets at this time. 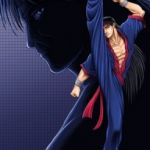 The Mediafire link is still active, It's just it's set to private. I'm sure DarkValentine can sort that.

I appreciate it. Trying to find that version elsewhere has been irritating.

i downloaded the emulator and STILL cant rip levels. can someone help