Okay, seems some people has problems with elevators alright so here are some basic advices in how to make them work properly.

And before anyone asks, unfortunately, the elevator goes only straight one stop, it cannot stop in between. And when it stops, after you beat all the remaining enemies, scene's over.

As a tip, try to make your elevators (layer 001 on fpg) that fit on your screen. unfortunately, the free roam camera doesn't seem to work so you'll be stuck in the same take forever. If you make a longer elevator than your screen, you'll be fitted in the middle of the layer automatically. 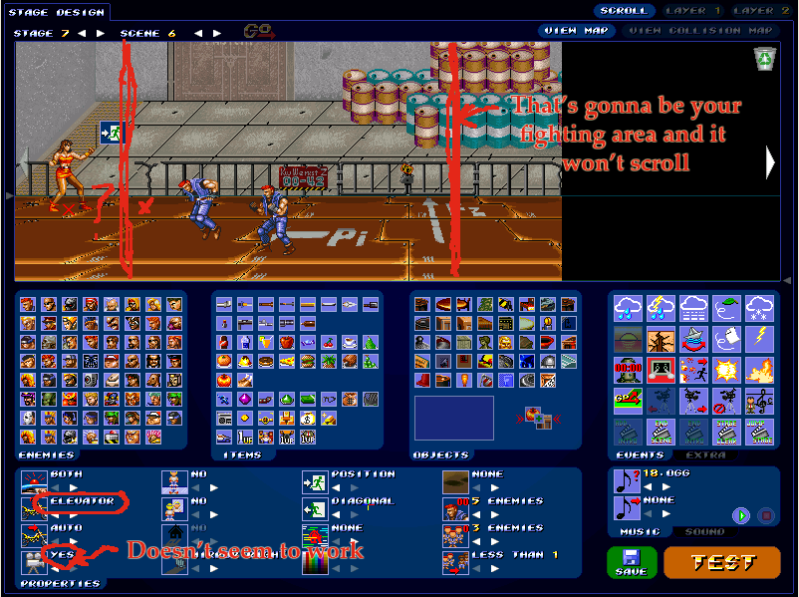 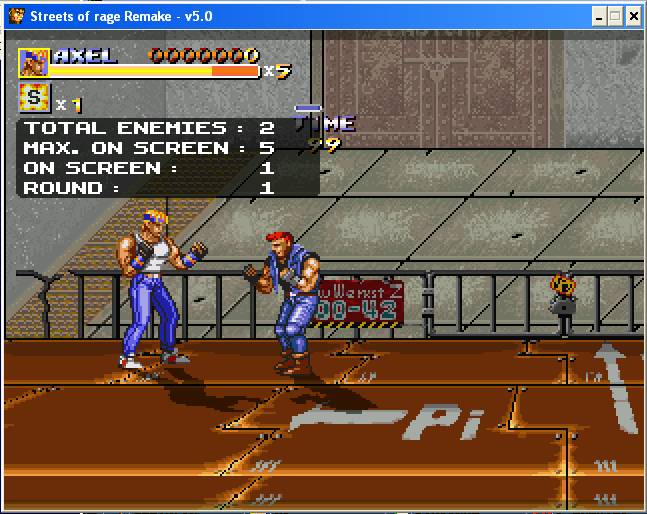 To make an elevator work, your second layer (in the fpg the layer named 10) is the length of the elevator trip, so the taller the longer the stage will do. Zarzak also discovered that maximum length of the elevator is 10000 pixels height wise.
*IMPORTANT, BUG PROBLEM!*. If your elevator is going down, for a strange reason, the lift will stop midway your Layer 1 map (which is halfway of your scene). In order to have your elevator work as intended and reach the length you want to, make your fpg 10 layer double the height you want (say, you want to make it 3000 pixels then make the layer 6000 pixels with the lower half with nothingness or stuffing).

Afterwards, it is important to put your layer 1's Scroll command (fpg 10) in Auto Up (if your lift it's going down) or Auto Down (if you're going up). If you have other background layers that you need to be scrolled along with your elevator, also put them on the auto up/down setting right as the layer 1, otherwise, it won't budge and you won't take off wherever you are. If you don't put the other layers on auto up/down, the layer will remain still on the screen. 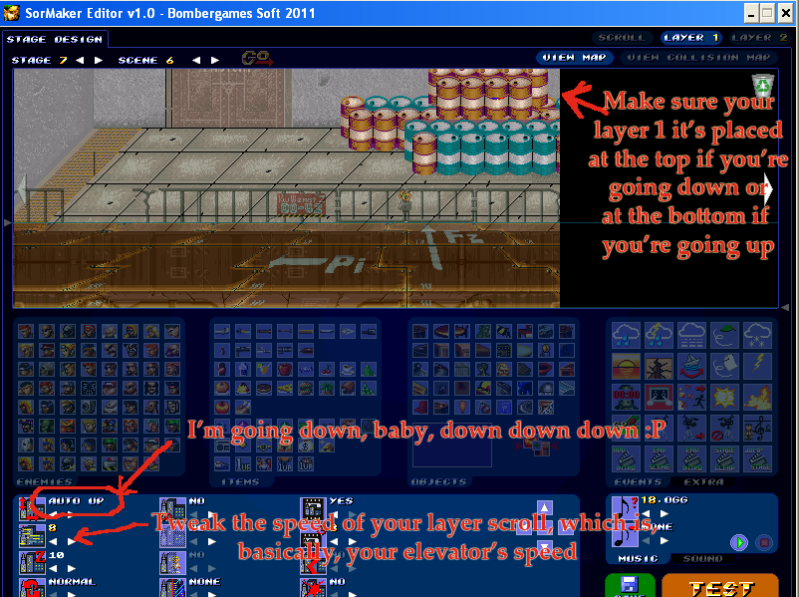 Now, usually the elevator will stay at ground (or top level, if you're going underground) in the first wave of enemies, which means, if you put all your enemies in Round 1 (only one way), the elevator won't budge and scene will be done without the elevator being activated. So, in order to make it work, it's necessary to have a second wave onwards so the fight takes part while the platform is moving. 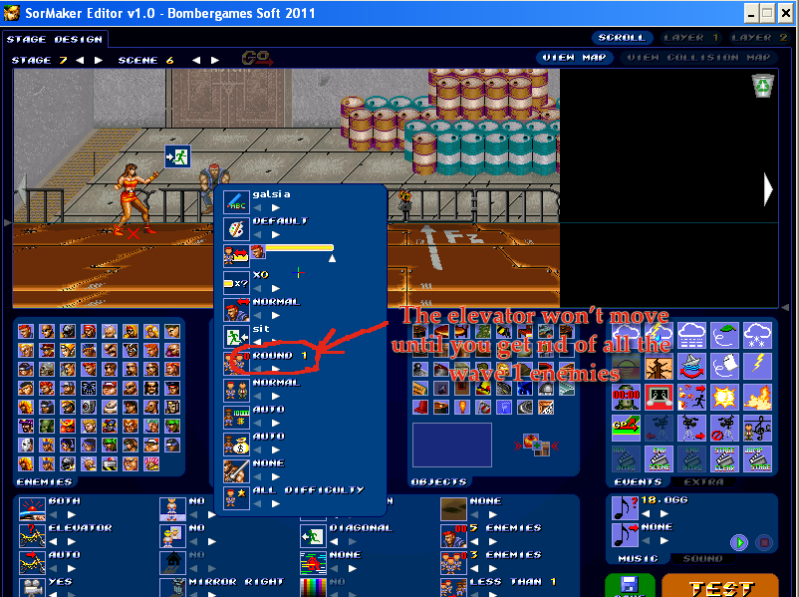 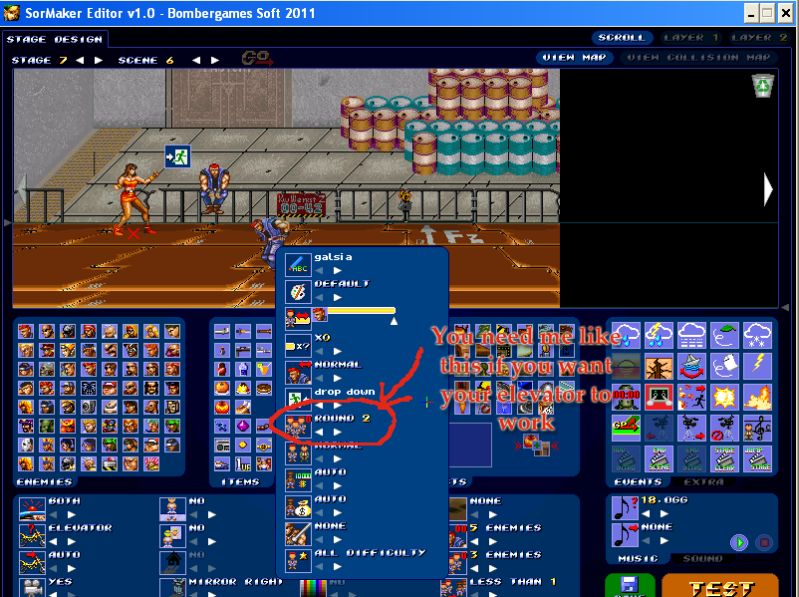 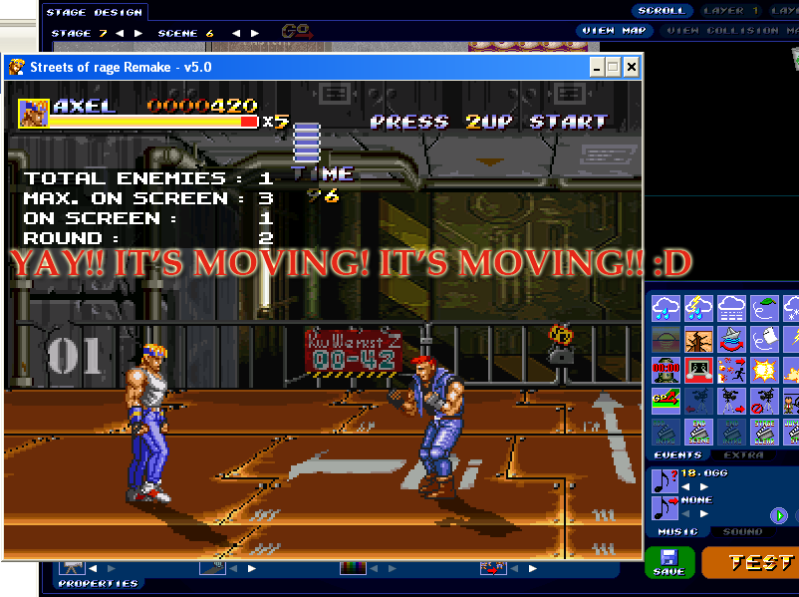 The game will move on until you reach the top of the layer 1 if going up, or halfway your way to the bottom if you're going down (that thanks to the stupid bug). If you haven't finished up all the enemies when you arrive to your destination, you must get rid of them in order to continue.

Also, as tip, if you want your elevator to start moving from the beginning, configure all your enemy waves from Round 2 onwards, this way your match will be on the move until you reach the top or bottom of your level. Remember, the elevator engine on SORmaker, sadly, was not designed to have multiple stops, it will be stopped either at the beginning or after it reached the end of the 2nd layer.

If you REALLY want to make multiple stops, you might have to divide your elevator stage in many scenes, which every scene would be the stops you want to place.

Top quality tutorial by Vecta is this one

Benny26 wrote:Top quality tutorial by Vecta is this one

Alright, by now many of us already know the limitations that elevator stages have (no free roaming areas, enemies won't drop items). To solve this problem, set your stage as normal scrolling instead of elevator and make it as long as you like (saving 3 64 pixelslots before the end of the scroller) with the camera lock and the free roam camera. Just make your background with auto scroll up or down and tadaa~! The best is that you really won't need to keep going forward as soon you clear the area off enemies to move to the next scene.

Don Vecta wrote:Alright, by now many of us already know the limitations that elevator stages have (no free roaming areas, enemies won't drop items). To solve this problem, set your stage as normal scrolling instead of elevator and make it as long as you like (saving 3 64 pixelslots before the end of the scroller) with the camera lock and the free roam camera. Just make your background with auto scroll up or down and tadaa~! The best is that you really won't need to keep going forward as soon you clear the area off enemies to move to the next scene.

Only downside is that enemies can press their delayed-instakill button... (ie. grab food)

This trick also works well if you need a room with no further scrolling (say 320 x 240), like entering and leaving without using the alternate route trick. Just set an invisible layer behind at auto scroll up or down (preferably quite fast) and set your mooks at round 2 onwards. Right when the mooks are dead, scene's over in insta-exit.

However, two things will happen.

1) The scene will shake a bit, like the earthquake event. Unfortunately, there's no way to avoid that.
2) the sound of the elevator starting up and stopping will play. This can be averted by customize your sound scheme and put a mute sound for the elevator stop instead.

Okay, update on this trick. It is possible to create this static rooms without being set in elevator mode. It can be done in scroller left, diagonal left (this is if you need a bigger up and down space to move, but probably won't be able to scroll down as it might require you to walk forward, so this could be useless), vehicle left (this could be good as the earthquake shaking effect can be easily disguised as the vehicle moving), and boat left. Scroller right, boat right and vehicle right will get stuck asking you to go further without being able to go further anymore. Just set a layer as described above in auto up and it will work.

The beauty of this is that you won't get that elevator sound going on, however, you won't be able to stop the shaking effect. Anyways, worth trying for any static stages.
_________________