Recently found about Version 5.2 and I've been playing it on and off in the meantime.  I'm not into the technical aspects of the game, but I've played through on Normal with all of the original playable characters and never had any issues as far as I can see.  The gameplay is fun and the new music tracks are great.

That is to say that it's not perfect, and I do have some ideas that can be played with for a future update.  It's a bit long, but please hear me out.


1. Have an option to skip cutscenes.
-I have made multiple playthroughs of the game and unlocked every scene, so for me at this point, the cutscenes become kind of redundant.  It would be nice to have an option to disable cutscenes to have the game flow more like Streets of Rage 2, with instant stage by stage progression.  Now I know there is an achievement for watching all cutscenes, so that may need to be adjusted (I'm not sure if that achievement is for the in-stage cutscenes or endings only).  Either way, the endings should be played as normal, obviously.

3.Update to the Stage 5 (Helicopter/Jungle) route progression.
-One of the improvements I like to Stage 5, Scene 5 (Deep Forest), was the inclusion of a Fredrick/Zamza boss fight on the walking path route.  Originally the stage would just end in 5.0 and it felt very lazy.  Inversely, the Jetski route, Scene 6 (Down River) originally had a Jack/Soya boss, but this was removed in 5.2 when the vehicle sections were shortened.  Now this section is the only part of the game that has no boss in it and just goes into Stage 6 very abruptly.  I would recommend that the scene end and transition over to Scene 8 (Jetski Ride) or Scene 9 (Boat) and allow the players one final chance to get onto the SOR 2 route, rather than stay on the SOR 3 style route.

4.Replace the Mr.X Sprite that appears in the 5.2 intro.
-The intro for 5.2 is amazing and leagues above the one from 5.0, but I still have a bone to pick with it.  Honestly, the Mr. X sprite looks very silly, as he looks like he has a stupid grin and a big bulbous nose (He has a thin nose in his profile pic).  His sprite from SOR 2's intro was perfect and very iconic, and it would have complimented this intro nicely.  I even drew up a proof of concept showing this:

5.Additional Bosses (2 Ideas)
-First new boss I would like to see is the Predator (aka Tracker) boss included on Stage 3 Scene 8 (Alien Bridge).  I've heard of this boss before, but was honestly surprised to actually see him in a SOR 2 Game Gear let's play (From the stage in which the scene is based off of, GG Stage 3).  It's odd that this boss wasn't included as it's one of the more unique in the series.  Maybe because of copyright, but that seems unlikely.  So as long as the sprites are available or could be made (To look like an alien or robot), the Predator would be a good addition.
-Second would be Break, the robot duplicate boss from SOR 3 (Stage 3, Construction Site), to appear on Stage 7 Scene 4 (Monster Gallery).  Now the robot was an Axel clone in the original, but in Remake it could be a copy of the current player character (Or characters if 2 players are involved).  Main issue might be having an enemy A.I. for each of the player characters, which would be a bit extensive.  But it's an interesting concept I'd like to see implemented.
-Both the Predator and Break(s) are the only bosses from the originally games not featured in Remake, and their omission is saddening.

6.New Player Characters (Unlikely, Potential Guest Characters, 2 Ideas)
-I honestly doubt this is going to happen, but new player characters are always welcome.  Particularly guest characters from other Sega games.  However, there not many I can think of that would fit well in the Streets of Rage setting, but I can at least think of two.  First is Joe Musashi, from the Shinobi series.  As one of the most iconic ninja characters in gaming, he would feel right at home with the SOR cast.  Second would be Sketch Turner from Comix Zone.  Cool comic writer guy and martial artist would feel right at home in Wood Oak as he has more than enough combat experience to take on the Syndicate, in addition to armies of mutants.  Again, it's not likely this is going to happen and it's just wishful thinking.  If anyone can think of any other characters that would be great for Remake, please post them!

If you got this far, thank you for taking the time to read all of this. Hopefully some of these ides will be part of Remake in future.  Please let me know what you think of any of these concepts.

1. Ever tried pressing START during a cutscene?
2. Not particularly necessary, but could be a good addition.
3, 4, 5 - agreed. I was taken aback by the new horrible Mr.X sprite in the intro, and adding a Predator-like boss (not Predator himself though) and Break would be a fun idea.
6. Not sure how I feel about this. These characters seem completely out of place in the SoR universe. 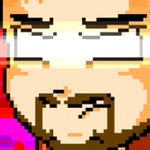 1. Enough times to know I would ask for such a feature in the first place. It's not that much of an inconvenience, but it would still be nice to have.
2. I'd think it be interesting, especially if someone wanted to more recreate the SOR 1 experience more closely.
3/4/5. I hoping these get implemented, but that's going to be down to whoever's actually still working on Remake. I hope they give these ideas a chance.
6. This idea was a bit of a stretch anyway. It already takes a lot of time to create new PCs, so I don't expect anymore outside of the 12 available. And I was trying to this of Sega themed guest characters that would make some degree of sense to be there. Rather Joe or Sketch rather than Sonic, I suppose.

this game is just awesome in every sense